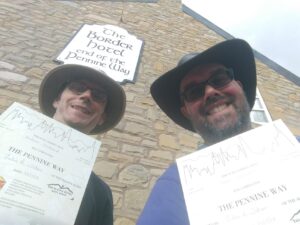 First of all some words about the Forest View Walkers Inn. It’s a fantastic place, really brilliant. Sorry, hyperbole again. But it really is. It’s the ideal stopping point for walkers in Byrness, and it’s ideally situated to help with splitting that murderous final day. We stayed the first night, after hiking from Bellingham, we hiked to the halfway point at Windy Gyle the next day, they collected us from nearby (2 miles nearby), we stayed the second night, then they bussed us back out to 2 miles below Windy Gyle to finish the walk. And when I say they bussed us – it took about half an hour along single track military roads, so not for the faint hearted, and taking a sizeable chunk out of their very busy schedules.

Unfortunately Adam has sustained an ankle injury, and, after persuasion, relented to retiring from the hike before the end (if you’ve seen the photo of his ankle on Facebook you’ll understand why). We agreed early on that it was a team effort though – I covered Adam as he covered me. 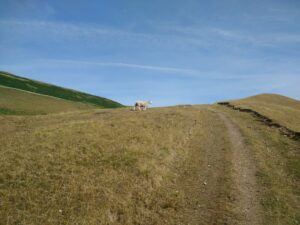 So I started the final day, after the rollercoaster ride along the military roads. The climb up from the drop-off point at Trows Farm was, frankly, rude. Two miles almost straight up along a farm track to Windy Gyle, in the same kind of heat and sunshine we’d “enjoyed” during the first couple of days.

Then, apart from meeting two national park wardens who were mending a fence, I didn’t see anyone until near Auchope Cairn. On the climb to said cairn I met a lady who we’d encountered at the Forest View. She’s walking from Land’s End to John O’Groats in aid of pancreatic cancer research. She’s taking it a little more steadily than us, but is mainly camping or sleeping in mountain refuge huts (as was her stopping point for today, just down from Auchope). 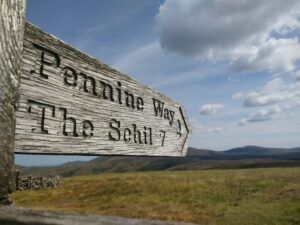 It was at Auchope that I lunched, looking down into the valleys and over the summits that I had yet to climb for the day. Although it looked frightening from where I sat – the amount of metres to climb, miles to walk – I was soon at the summit of The Schil. 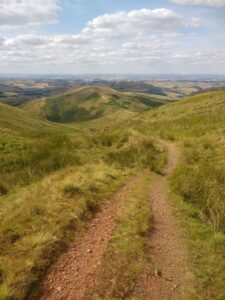 So that’s it for now, for PW20. As the next couple of days pass I may share more thoughts. For now, we’re off to bed. 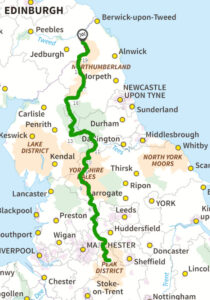 No animal encounters today, I’m glad to say, save for the usual sheep who scatter at your approach. Our first challenge for the morning was obtaining breakfast and lunch, as our Youth Hostel was self-catering. We’d established that the cafe

It’s funny how a day can start one way and finish completely differently. We started out from the Twice Brewed Inn with the mist covering Hadrian’s Wall, moisture on the windows, a brisk breeze, and we finished in Bellingham in